‘My stay was to be short in that country; because my father dy’d at sea, and never arrived to posess the honour design’d to him (which was Lieutenant-General of six-and-thirty islands besides the continent of Surinam)… so that though we were oblig’d to continue on our voyage, we did not intend to stay upon the Place' 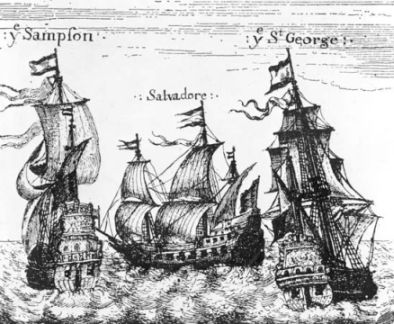 So wrote Aphra Behn in her book   ‘Orinooko’ , which is presented as a work of fiction; we can only assume that some of the details of her stay were taken from Aphra Behn’s own experience.  We  think from other records that she and her family arrived in Surinam on the North East coast of South America, late in 1663, and stayed at a plantation called St John’s Hill for some months.

No records have ever been found of the ship, the route or the voyage itself that Aphra Behn took with her famiy,  to Surinam.  Ships at that time did not keep written passenger lists beyond the duration of the voyage; arrangements were individual and informal, and Aphra  did not write anything as herself about the voyage.

A very few passengers kept diaries: one such was a merchant called John  Josselyn. Josselyn was a merchant who made the sea crossing to America and back in 1663 ; he was travelling to North America, – but gives details of the voyages that are otherwise rarely recorded the time.

By the mid seventeenth century,  trade with the Americas was well established, in ships of a wide range of sizes, travelling with cargo – tobacco was a very lucrative crop and the sugar trade was  increasing in value every year. On the way out ships would take European supplies for the expanding colonies already in existence.

These cargo ships would take on paying passengers, as many as there was room for in the ship.  Better off passengers on bigger vessels would have a tiny cabin towards the stern (back) of the ship, less wealthy passengers would have a communal place below the main decks. 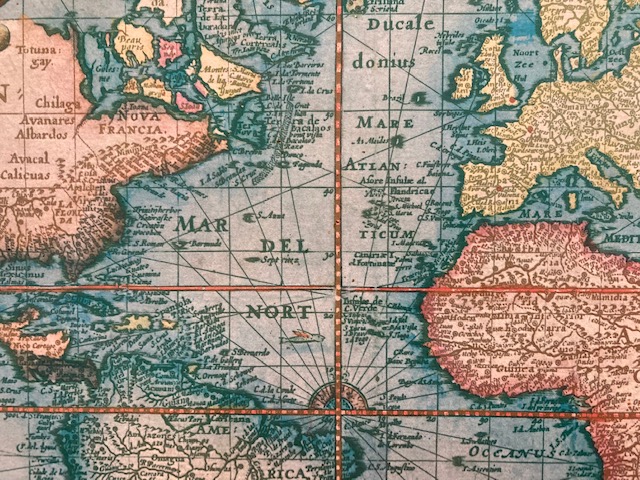 Ships from England bound for South America, would sail south past the coast of France, Spain and North Africa, docking for  supplies of fresh food and water in the Canary Islands, Cape Verde or the Azores, before heading west  across the Atlantic  to arrive on the coast of South America.

This  route would take anything upwards of seven weeks, depending on the winds; around three to four weeks to get to the Canaries of Azores, then another three weeks in the open Altantic, out of sight of land until reaching continental America.  The journey back to Europe was usually quicker, as the winds would be more  favourable for eastbound travel.

Almost all ships had a  similar look –  a main deck  running most of the length of the ship with  higher structures at each end.  At the  front (usually called the prow or ‘fore’)  would be a smaller enclosed structure of partitioned rooms called the  forecastle,  the lower maindeck or ‘waist’  and a high structure of separate cabins , the  sterncastle or ‘aftercastle’  running from the  mainmast ( the central of three masts)   to the back of the ship  (the stern or ‘aft’) This would usually be two levels high but sometimes three on very large vessels. 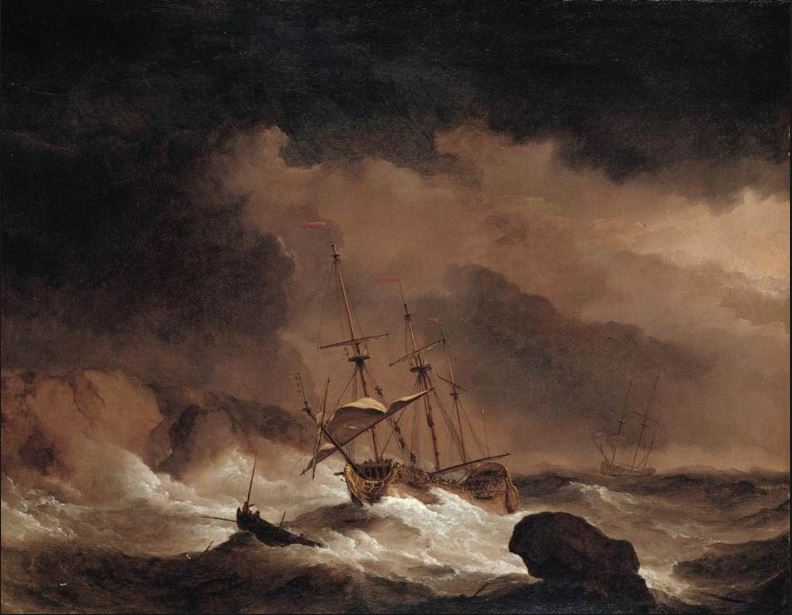 Higher class passengers had berths in the aftercastle; presumably Aphra Behn and her party had a cabin here.

Ships making the crossing varied in size considerably, but however large the ship, space was always at a premium, and the storage of cargo considerably more important than the human passengers: the cabin Aphra and her family almost certainly shared would have been tiny, and far from watertight in rough weather.   Slightly later accounts tell of passengers tying themselves to their beds in stormy weather, in order to avoid being flung about the cabin, unable to keep dry due to the water leaking in through all the ship’s joints.  For anyone unused to shipboard life, it  would have been, on occasion, terrifying.

On the long voyage across the Atlantic,  the diarist Josslyn records every conceivable sort of weather from high winds and raging waves to flat calm.  Of the two , flat calm was possibly worse, as it could last for days while stores of food and water dwindled with each passing day  Boredom would have been a major preoccupation: in calm weather, with a flat sea, there would be nothing changing to look at all unless one was lucky enough to spot a whale or school of dolphins.

Basic food rations would be provided, but it was strongly advised to take provisions of ones own as much as possible.  Fresh food would run out quite early in the passage across the Atlantic: the Captain might have brought some live chickens and possibly a goat or small cow on board at the start of the voyage; these would supply eggs or milk for some part of the voyage, and would later be slaughtered and eaten.  The captain would invite the richer ‘cabin’ passengers to dine with him daily. Presumably Aphra Behn and her family were privileged to dine at the captain’s table, but even there the food would have become dull and poor in nutrients before the end of the voyage. Richer travellers were recommended to take their own bedclothes and medicines. 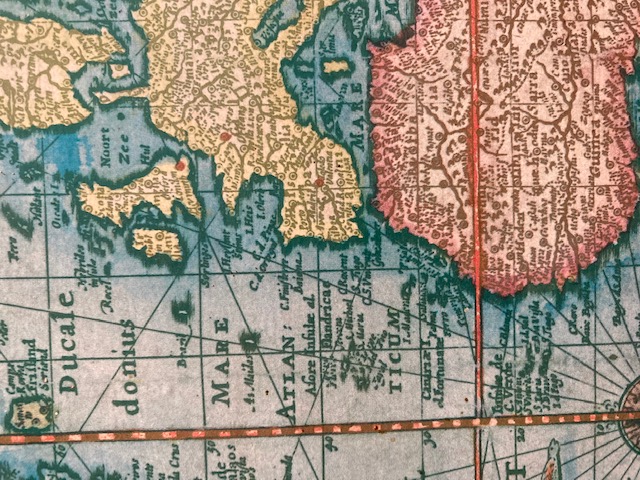 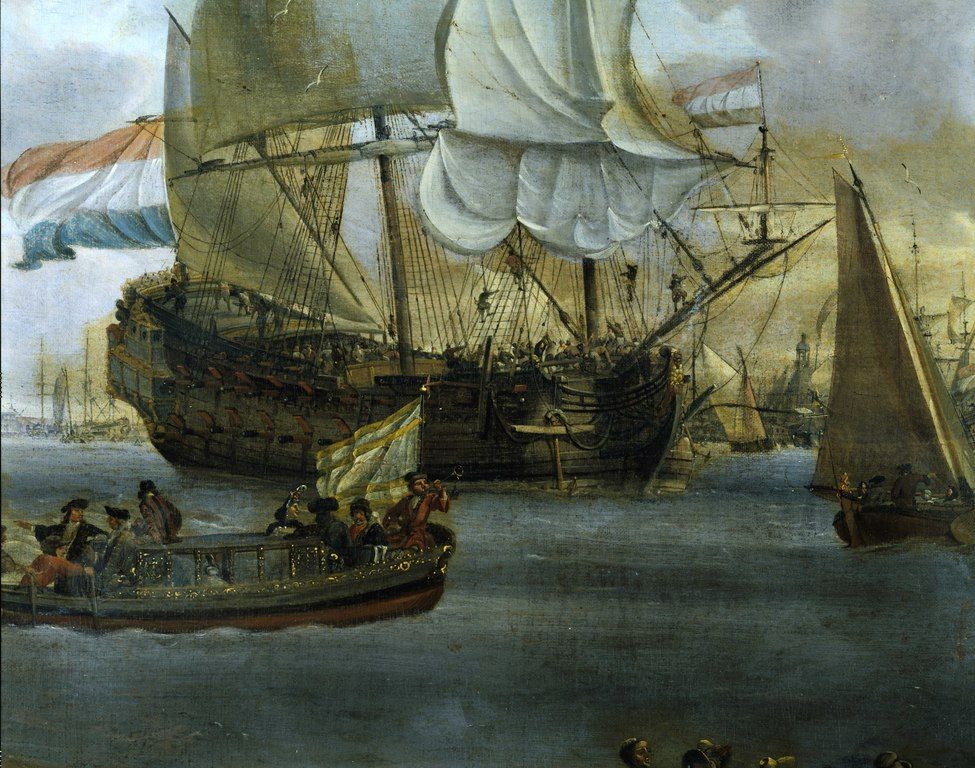 ‘For private fresh provision you may carry with you (in case any of you or yours should be sick at sea) conserves of Roses, Clove Gilly-Flowers, Wormwood, Green ginger, burnt Wine ….juice of lemons Well put up to prevent or cure scurvy’.

Scurvy was already well known as a dangerous sickness of anyone undertaking a long sea voyage and was accurately recognised  to be a disorder of poor diet, which often lead to death.

Water was always a  concern – it would always be limited, and stored water would be stale or full of algae by the end of a seven week trip; whenever possible, in times of gentle rain, sails would be rigged to catch fresh rainwater to replenish the barrels.

Many ships were lost crossing the Atlantic; there was a degree of piracy already developing as well as the dangers of weather, sickness and poor seamanship.  It must have been a relief to arrive on dry land at the end of such a journey.